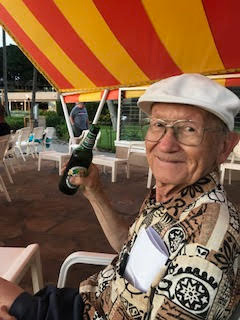 Vladislav Ako Bevc passed away on May 16, 2022, in Pleasanton California, after a long battle with cancer. He was born on April 9, 1932 in Ljubljana Slovenia (at that time, part of the former Yugoslavia) to Ladislav and Ivanka Bevc.

He often shared fond memories of his early childhood in Slovenia, where he spent time vacationing on the coast and in the mountains, and visiting family in the countryside. He excelled at school, particularly in mathematics and physics. His childhood was interrupted by World War II when his homeland was occupied by Fascist and Nazi forces, before falling to communism at the end of the war.

The war separated Ako from his father Ladislav, who after spending years in refugee camps, emigrated to America. Ako was also separated from his sister Breda and mother Ivanka by the communists who seized their family home. Alone in communist Yugoslavia, Ako studied electrical engineering at the University of Ljubljana. He learned English, and had a job writing subtitles for American movies, and he dreamed and plotted of how he could get to America to join his parents and sister. His dream came true in 1955, when the communist government issued him exit papers, and U.S. Congressman Scudder (R-Napa) introduced a private bill which allowed Ako to emigrate to the U.S.

Upon his arrival in California, Ako immediately enrolled in U.C. Berkeley, where he lived at International House, made many lifelong friends, and started taking flying lessons. In quick succession, he earned Bachelors, Masters, and Doctor of Philosophy degrees, all in electrical engineering, from Cal. During that time, Ako traveled to Yugoslavia, where he went to a cousin’s party, and met Nada Jarosin. Shortly after his return to America, he invited Nada to visit him. He met her in New York, brought her to California, and proposed. They were married in Berkeley on May 20, 1961.

After graduating Cal, Ako spent a year in Oxford at Saint Catherine’s College doing postdoctoral studies. During his career, he was a professor at the Naval Post-Graduate School in Monterey, worked for Hughes Aircraft, Aerospace Corporation, Lawrence Livermore National Laboratory, and the California State Public Utilities Commission. He was also a lecturer at University of Southern California, and at San Francisco State University, and a visiting Fellow at Stanford’s Hoover Institution.

No doubt Ako’s early life in Yugoslavia and his journey to America made him tough, and made him a fighter, and that served him well in his fight against cancer, allowing his family and friends a good long time to say goodbye. He loved America, and he cherished the freedoms and opportunities that we have here, and he spoke out often in preservation of these freedoms here in America, and abroad. He was glad to see communism come to an end in Slovenia when his homeland broke away from Yugoslavia, and he was recognized by the new Slovenian Government for his efforts in support of Slovenia. He did not forget about his past and where he came from: He wrote books and articles in support of human rights and freedom, and worked to redress the injustices of the communist regime in Yugoslavia. He fought for the Slovenes in the diaspora, for the reappropriation of property rights, and for the rights of minority Carinthian Slovenians. He had a deep sense of democracy, justice, and liberty. He always challenged authority when it attempted to infringe on rights.

Ako spent the last 52 years of his life in Danville, and enjoyed spending time at his vacation house in Tahoe, and in Maui. He liked to travel internationally, and enjoyed going on cruises with his wife and daughter. He was an avid skier, loved sailing, enjoyed hiking, and was an accomplished pilot and flight instructor.