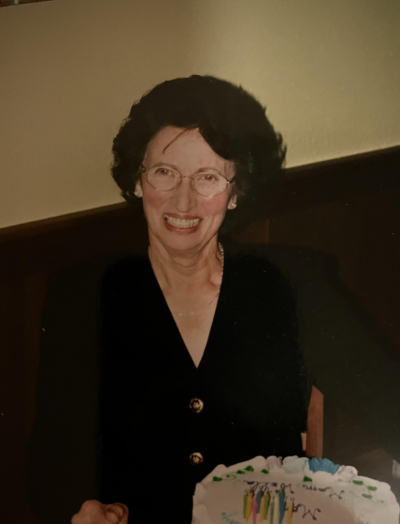 Mary Marie Safreno passed away peacefully early in the morning on Sunday, August 28nd. She was almost 91 years old. She was kind and humble and focused on the health and well-being of her family until she passed. Mary was born in the East Bay Area and raised by her Aunt Gloria and Uncle Tony in Hayward with her sisters Betty and Ellie. She attended Hayward High School. In 1953, she met Douglas, her husband of 65 years until his death in 2018. She lived in Pleasanton for 69 years, almost entirely at the same home that they purchased and expanded over the years.

Mary had a very sharp mind and was the center piece of several sizeable businesses in the Pleasanton area, keeping the books and managing the back office. With Douglas, they went on to purchase, develop and own commercial real estate in Pleasanton. She was always working on something--her businesses, their real estate, her family, their home--she was not comfortable resting and worked from the moment she woke in the morning until she went to bed. She also was actively involved in several Pleasanton communities, including St. Augustine Catholic Church, Pleasanton public schools and 4H. Mary and Douglas spent a great deal of time developing a summer home on an island in the Sacramento Delta. The island was a substantial and challenging undertaking which brought great recreational rewards to her family and friends. She loved the outdoors and her gardens. She was well-versed in every type of flower and vegetable that grows in Northern California and passed this knowledge on to her children. Despite being core to virtually every activity where she was involved, she never wanted credit for her enormous efforts. She was extremely humble.

Mary's greatest joy involved her family. She never lost her smile when talking about her children, grandchildren and their spouses. She and Douglas had three children, Lynda, Casey and Ty, a son-in-law, Erik, and two daughters-in-law, Lisa and Trudie, all of whom visited with her over the years up until now. Mary also has eight grandchildren, Diva, Ana, Ella, Douglas, Steven, Dina, Neill and Wade, and one great-grandchild, Gwen, with whom she visited in late August. She also has two grandson-in-laws, Tyler, married to Diva, and Sam, married to Ana. She will be deeply missed.