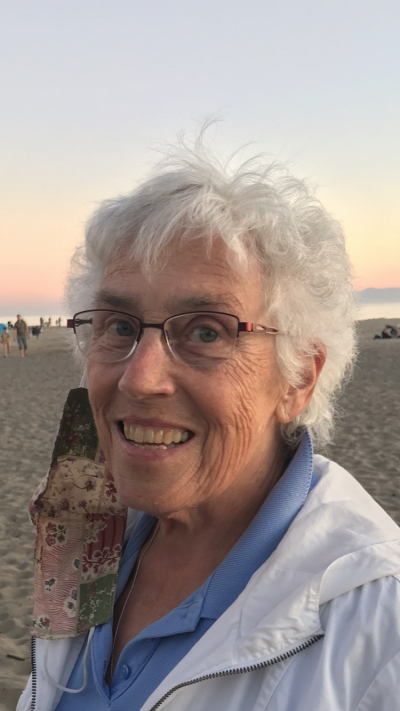 The second of five children, Hildegard was born November 12, 1939 in Aschaffenburg, Germany. During World War II, the family moved away from city bombings to Nordheim v.d.Rhön, a small farming village where her mother’s family lived. In 1952, they returned to Aschaffenburg. Hildegard finished school and started working for the American Express Company bank on a U.S. Army base, where her German father was bank manager, and where she could practice her English. In 1959, at age 19, on an adventure to experience life outside Germany, Hildegard and a friend traveled by boat to New York under sponsorship of a stateside relative who lived in Buffalo. They found jobs as au pairs in Buffalo, NY and then a year later rode across the country by bus to California where Hildegard worked at a bank in Los Angeles for another year.

Hildegard then returned to Germany as she had promised her parents. She soon met David Melander while she was working at the U.S. Army Education Center in Aschaffenburg as office secretary. David was stationed in Germany as a soldier in Artillery Survey and had additional duties as a part-time teacher when they met. They married in 1963. In 1965, soon after their first son Marcus was born, they moved back to the U.S. where David began his career with the Alameda County Probation Department. They spent their formative years as a new family in Oakland, CA, where Stephen and Heidi were born. They moved to Pleasanton in 1975, put down roots, and developed many community connections.

Hildegard worked with elementary-age children for 30 years at schools in Oakland, giving extra attention to children with special needs. She worked at E. Morris Cox and Raskob, and taught first grade at St. Elizabeth Elementary School. She enjoyed the outdoors, camping, hiking and traveling to places near and far. She was involved in the Catholic church, teaching CCD classes, praying at weekly “Adoration” sessions, participating in Neighborhood Christian Communities, and administering communion to the sick. In the last few years, Hildegard enjoyed taking neighborhood walks, family gatherings, reading, visiting with friends, sitting in the sun, and tending to plants in the house and garden.

Photo Gallery
0 photos Upload a photo
Remembrances
0 entries Submit a remembrance
Memorial service
A memorial service and celebration of life will be held on Saturday, March 19th at 10:30AM at St. Augustine Church, 3999 Bernal Ave., in Pleasanton, CA.
Make a donation
In lieu of flowers, please consider a donation to a science-based nature education program such as Lindsay Wildlife Experience in Walnut Creek, St. Elizabeth Elementary in Oakland, Hope Hospice in Dublin or to your favorite charity.
About this site     Contact us