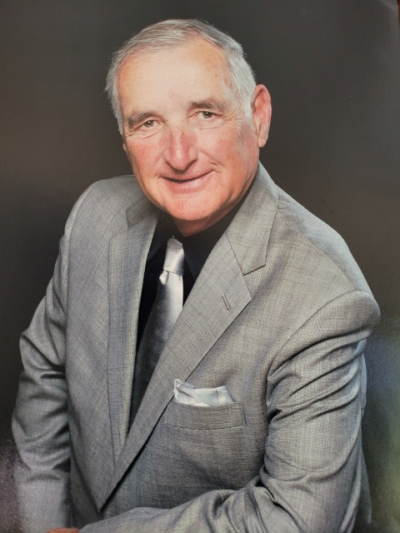 Charles Carlo Michelotti, loving husband, father, grandfather, brother, uncle, and friend passed away at the age of 84 on Sunday, August 21, 2022, in Pleasanton, California.

Carl was born to Josephine and Charles Cleto Michelotti on November 4, 1937. He was the eldest of three children and grew up in Seattle, Washington. Carl attended Seattle Preparatory School where he was a part of the high school football team and graduated in 1955. After graduation from high school, he went on to attend Central Washington University in Ellensburg.

Following college, Carl started working in the ceramic tile business. He built his career in sales and management where he thrived in building tight relationships with clients for over 40 years. He was very well respected in the industry and was awarded for his achievements.

In 1965, Carl was introduced by mutual friends to the love of his life, Sharrell, in Sacramento, California. The two of them hit it off right away, and Sharrell fondly remembers that she was taken by his charm and wit. Their love continued to blossom, and they were married on October 7, 1967. Carl and Sharrell resided in both San Mateo and Sunnyvale during which time they had two daughters, Carlene and Michelle.

Carl moved his family to Pleasanton, CA in 1975. It was in Pleasanton that the Michelotti family settled and quickly became involved in the many activities. Carl was an active participant in the Pleasanton community, St. Augustine Catholic Church, Sons of Italy and helped coach various youth sports including soccer, softball, and football. He rarely missed a sports game or event of his daughters. He continued to show this enthusiastic support for his grandchildren, nephews, nieces, and neighbors with their activities, as well, in the years that followed.

Family and friends were everything to Carl. He had a wonderful sense of humor and contagious laugh. He was well known for his affectionate greetings and warm hugs. Carl enjoyed spending many summers with his family in Campbell River, British Columbia, and took many he knew up there to introduce them to his passion of salmon fishing. Carl also enjoyed golfing, watching football, working in the yard, good food, travel, and anything "Italian."

In retirement, Carl enjoyed being active in the SIRS group, serving on the Finance Committee for St. Augustine Catholic Church, attending sports and school events of his grandchildren, meeting his “donut gang” every morning to start the day off laughing, and traveling with Sharrell to various countries including China, Australia, New Zealand, Britain, France, Germany, and of course, Italy.

Carl was preceded in death by his parents Josephine and Charles Cleto Michelotti, brother Michael Michelotti, granddaughter Hope Vaule, and son-in-law Michael Gable. He is survived by his wife of 54 years, Sharrell Michelotti, daughters Carlene (Joseph) Vaule and Michelle Gable, grandchildren Matteo and Grace Gable and Ellamarie Vaule, and his sister Marlene Pyzik.

Carl will be greatly missed, and we will always remember the beautiful memories of his love, laughter, generosity and giving heart. All are welcome to attend his services on Friday, September 2nd, 4:30-6:30pm for a Vigil at Graham Hitch Mortuary in Pleasanton and Saturday, September 3rd, at 10am for a funeral mass at St. Augustine Catholic Church in Pleasanton.

In lieu of flowers, donations may be made in Carl's memory to Hope Hospice of Dublin or UCSF Benioff Children’s Hospital of Oakland.

Photo Gallery
0 photos Upload a photo
Remembrances
0 entries Submit a remembrance
Memorial service
All are welcome to attend his services on Friday, September 2nd, 4:30-6:30pm for a Vigil at Graham Hitch Mortuary in Pleasanton and Saturday, September 3rd, at 10am for a funeral mass at St. Augustine Catholic Church in Pleasanton.
Make a donation
In lieu of flowers, donations may be made in Carl's memory to Hope Hospice of Dublin or UCSF Benioff Children’s Hospital of Oakland.
About this site     Contact us