Cutting BART service enough to shore up its projected nine-figure annual deficits in the coming years would result in a "death spiral" for the transit agency, officials said last week.

Sunday, 4:23 PM | No comments yet
Cozy up with these 7 children's books emphasizing empathy, overcoming differences


In a season that celebrates peace on earth, now is the best time to share lessons about empathy, overcoming differences and working together. Some of the best children's books published in 2022 touch on these topics.


The Pleasanton downtown holiday parade has been canceled, but the tree lighting will go on Saturday evening -- early, at 5 p.m. -- outside of the Museum on Main, city officials decided just after 3:30 p.m. due to the ongoing rain.


Dublin Police Services identified Kenneth Krainski as the decedent in a domestic disturbance in Dublin last month that escalated into his shooting death, with police continuing to believe that the shooting was in self-defense.

Around the Valley: Questionable actions


Questionable actions at recent municipal meetings might have gone unnoticed if not for astute and curious readers.


Pleasanton resident Tim Ryerson, GM of Ballistic United, founded "Get on the Bus" to give children who might not be able to the chance to play soccer while also learning valuable life skills.


Big changes are coming to the Sunol Glen Unified School District after Sunolians voted in a new Board of Trustees and also passed a $10.9 million general obligation bond that will help restore the small town's only school.


The effort is underway for Wreaths Across Pleasanton, which aims later this month to place holiday wreaths at the burial place of every military veteran interred at Pioneer Cemetery. Read that and more in our News Digest...


Bay Area residents with a vehicle made before 1999 can receive up to $1,200 as part of a buy-back program to improve local air quality, the Bay Area Air Quality Management District announced Monday.

Wednesday, 5:43 PM | No comments yet
'Elf the Musical Jr.' comes to Amador Theater next weekend


Everyone's favorite candy spaghetti-eating elf is coming to Amador Theater as the Pleasanton Youth Theatre Company (PYTC) casts will take the stage in "Elf the Musical Jr." beginning next weekend.


Pleasanton is set to host its annual Hometown Holiday Parade and Tree Lighting Ceremony in downtown this Saturday evening -- as long as the weather cooperates.


Civil rights attorney Pamela Price will be sworn in as the first Black district attorney in Alameda County following a close election race that first had her trailing behind her challenger and longtime county prosecutor Terry Wiley.


Fire Station No. 3 on Santa Rita Road was rebuilt into a two-story building with modern tools and amenities that will make firefighters safer and more effective and response times quicker.


A driver died after losing control of his SUV while traveling around 100 mph and crashing down an embankment on Interstate 580 east of Livermore on Tuesday morning, according to the California Highway Patrol.

Tuesday, 2:25 PM | No comments yet
Pleasanton Preps: Reflecting on 2022 football seasons for Amador and Foothill


The 2022 East Bay Athletic League football season ended with some positive achievements from both Amador Valley and Foothill. The contrast is looking to next year: The Dons have a lot more reasons to be excited than the Falcons...


Authorities have confirmed the identity of the Fremont woman who died in a head-on collision on rural Altamont Pass Road in unincorporated Livermore on Thanksgiving afternoon.


The beacon that has sat atop Mount Diablo since its installation before World War II is set to be illuminated next week in remembrance of the start of the United States' involvement in the war.

Monday, 6:42 PM | No comments yet
'Holidays in the Vineyards' brings festive spirits to Livermore


The Crayon Initiative, a Tri-Valley nonprofit organization that supplies crayons to children's hospitals throughout the country, has a new leader at the helm as of this fall.


The Pleasanton City Council and city staff have committed themselves to an aggressive December meeting schedule in order to adopt the city's new Housing Element by the statutory deadline of Jan. 31.

Sunday, 4:43 PM | No comments yet
Caltrans to begin overnight shutdowns for parts of I-680 in Tri-Valley


Caltrans is scheduled to close a portion of northbound Interstate 680 overnight beginning in December as part of a major improvement project starting from the I-680/Highway 84 junction to the Sunol Boulevard exit.


A passenger died on Thanksgiving afternoon after the driver of the car allegedly tried to pass slower traffic but crashed head-on into an oncoming vehicle in unincorporated Tri-Valley.

Friday, 10:40 AM | No comments yet
State grants money to local agencies, including Pleasanton PD, to crack down on illegal tobacco sales to minors


Cities, counties, school districts and law enforcement agencies across the state, including Pleasanton PD, will soon receive their share of millions of dollars in state funding to crack down on the illegal sale of tobacco to minors.


The winter holiday season is officially upon us. Here's our review of the events calendar in Pleasanton, Livermore, Dublin, San Ramon and Danville now through New Year's weekend...

Friday, 5:51 AM | No comments yet
What a Week: Pleasanton's new city manager making his mark

Friday, 4:27 AM | No comments yet
Measure P comfortably surpasses threshold to pass in Livermore


The two contested seats for the Dublin Unified School District Board of Trustees, areas 3 and 5, are among the elections with confirmed outcomes, as incumbents William Kuo and Dan Cherrier each won by a comfortable 2:1 margin.


The Tri-Valley community is gearing up for Small Business Saturday this weekend, when residents are encouraged to shop, dine and visit locally on the day after Black Friday. See that and more in our News Digest...


Voters across Alameda County have overwhelmingly supported the changes to agricultural and open space land-use policy for unincorporated areas, including the Livermore Valley, proposed under Measure D.


BART finished the 2021-22 fiscal year with a balanced budget due in large part to federal relief funding and more sales tax revenue than expected, budget officials with the transit agency said last week.


Hundreds of members of The Club at Castlewood flocked to the hillside venue to celebrate the reopening of its clubhouse earlier this month. Judging by the wide smiles at the evening reopening event, they were delighted with the result.


Laurie Walker had finished Election Night leading in votes for Pleasanton Unified School District's Area 2 position on the Board of Trustees -- and now that the vast majority of the ballots have been counted, she has secured the seat.


Educators employed within the Dublin Unified School District spoke out at a recent school board meeting against a district policy they see as 'suppressing' teachers' voices.


Dublin police confirmed on Tuesday that a man died from gunshot injuries apparently fired in self defense amid a domestic dispute that turned violent at an apartment complex two days earlier.

Tuesday, 3:44 PM | No comments yet
PUSD's Measure I clinches victory with better than 57% of the vote


After nearly two weeks of counting eligible vote-by-mail ballots, Pleasanton Unified School District's $395 million Measure I came from behind and was able to receive more than the 55% of votes needed to pass.


Pleasanton is set to see a 5.5% rise in the annual rates for wholesale water services from the Zone 7 Water Agency for each of the next four years after its Board of Directors voted 5-2 to approve the price increase last week.


On the heels of Thanksgiving, many East Bay residents will be heading outdoors to take part in an emerging initiative to promote recreational activity and environmental awareness on Friday.

Monday, 11:26 PM | No comments yet
Dublin: CHP honors fallen colleague on 15th anniversary of his death on duty


Officers with the California Highway Patrol in the Tri-Valley gathered last week to recognize a solemn anniversary alongside surviving family members of one of their own who died on duty 15 years ago.

Monday, 10:54 PM | No comments yet
Marchand wins election in Livermore, back for second stint as mayor


After nine days of uncertainty since Election Night, John Marchand has declared victory as Livermore's mayor-elect. Marchand will lead the city as mayor for the second time, having served in the position previously from 2011-20.

Some of the best jobs around
By Sherry Listgarten | 3 comments | 1,317 views 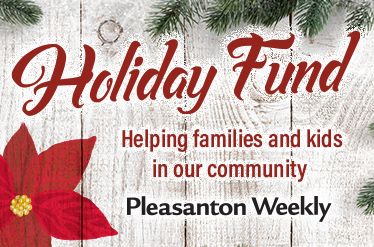 Your contribution to the Pleasanton Weekly Holiday Fund will go directly to nonprofits supporting local families and children in need. Last year, Pleasanton Weekly readers contributed over $74,000. A match by our fiscal sponsor, Three Valleys Community Foundation (3VCF), elevated the grand total to $80,000.