Rotary asking for donations through April 30 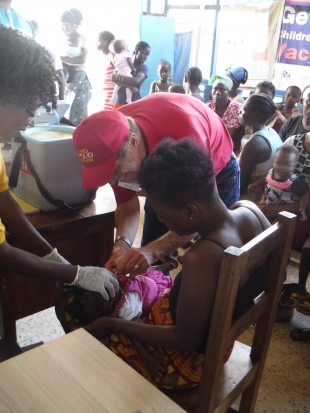 Rotary Clubs in the Tri-Valley are having a flash campaign now through April 30 to End Polio Now and asking people from Pleasanton and the Tri-Valley to help by donating directly to endpolio.org.

Liberia, a country of 4.7 million people, has had no new cases of the wild poliovirus since 2012; however, there is always a danger of children carrying the virus so Liberia is diligent about continuing to vaccinate.

The eradication of polio is one of Rotary International's longest standing and most significant efforts. Rotarians began this fight in 1988 along with the Bill & Melinda Gates Foundation, the World Health Organization, the U.S. Center for Disease Control and Prevention, and UNICEF. Partnering, these groups have immunized more than 2.5 billion children against polio in 122 countries, reducing polio cases by 99.9% worldwide.

The wild poliovirus only remains in two countries -- Afghanistan and Pakistan -- and Rotarians say they will not stop fighting the disease until it is ended for good.

The first few seconds after awakening; before I remember the virus
By Chandrama Anderson | 0 comments | 3,126 views