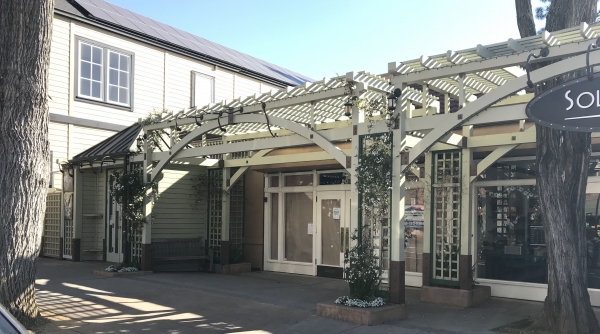 This vacant space at 310 Main St. (Suite D) is set to have a new tenant soon, Middle 8 -- a bar with live music seven days a week. (Photo by Jeremy Walsh) 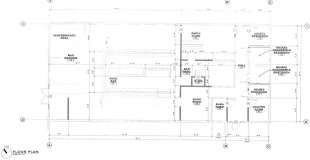 Floor plan proposed for the new downtown bar, Middle 8 -- with entrance at left. (Image courtesy of city of Pleasanton)

A new bar with live music could be on its way soon to downtown Pleasanton.

The Pleasanton Planning Commission earlier this month signed off on a conditional use permit for Middle 8 to open in the empty former Bollinger Nail Salon unit in the multi-tenant commercial building at 310 Main St.

The permit, which allows live music until midnight seven days a week, was unanimously approved with no public comment during a short commission meeting on Feb. 12 that featured only two consent calendar items, according to Ellen Clark, the city's community development director.

"Staff is of the opinion the proposed bar would enhance the vitality of the downtown with a new late-night option for downtown patrons in an appropriate location," city associate planner Eric Luchini wrote in his staff report to the commission.

"Conditions of approval have been included which will ensure the safety and general welfare of the surrounding area is maintained, while minimizing spillover effects such as noise and parking," he added.

Rick Dobbs proposes to open Middle 8 bar by converting the vacant nail salon space on the east side of Main Street between Abbie and West Angela streets in the multi-tenant building that also includes The Patio, Pairings Wine Bar Restaurant and Sole Desire Shoes.

The new bar will have a retro '70s feel with close ties to music themes, according to Dobbs' letter to city planners. The name Middle 8 comes from the phrase referring to the eight measures or bridge in a song after the first two verses.

"The part of the song that breaks up the monotony, changes the tone, the beat and the key. Middle 8 the bar is going to be no different," he wrote. "It's going to take what we've seen become bars today and turn it into something that's new, unique, but still a throwback to the swanky hotel bar look of the '70s with a few musical twists."

The application called for a full bar operating from 4 p.m. to 1 a m. seven days a week with capacity for 150 patrons maximum and up to 10 employees. Live amplified and non-amplified entertainment, generally jazz or blues music, would occur inside until midnight each night.

In addition to the music performance area, the interior would be reconfigured to include the bar, seating areas, restrooms, a game room with a pool table and television, and a private party or special event room for group events, according to city staff.

There would be no kitchen, but Dobbs plans to partner with a nearby restaurant to offer limited food service, or just have snacks onsite such as chips and nuts.

The project required permit approval by the Planning Commission because of the new bar use and for live entertainment after 11 p.m. The conditional use permit was approved without public comment or commission discussion on Feb. 12 as part of the consent calendar, a collection of items deemed routine and voted upon all at once.

It was not immediately clear when Middle 8 is scheduled to open.

* Also approved as part of the Feb. 12 consent calendar was a resolution in support of modifying a condition for the Rose Pavilion that prohibits a drive-thru on "Pad B" in Phase III of the site -- to accommodate a planned Taco Bell restaurant drive-thru.

But in order to do that, the company would need the City Council to remove a condition of approval imposed on the Rose Pavilion Phase III planned-unit development (PUD) 30 years ago that prohibits operating a drive-thru at that location.

City staff initially recommended denial of the request on Jan. 22 based on the original direction from the City Council in 1989 to add a specific condition barring a drive-thru in that area of Rose Pavilion. Clark said last month that drive-thrus tend to "have higher trip generation, thus more traffic and higher emissions, and contribute to less pedestrian-oriented environments than a non-drive-thru restaurant."

But the Planning Commission disagreed at the Jan. 22 meeting, supporting the applicant's request in part because the rest of the Rose Pavilion, as well as most other properties in the area, allow drive-thru restaurants, according to Clark, who also noted the original ban on that particular site appears anomalous in nature.

City staff brought back a revised resolution, reflecting the commission's differing point-of-view, for consideration on Feb. 12. Commissioners unanimously endorsed the resolution, which recommends the PUD major modification request for approval by the City Council. The item is likely to head to the council in the next couple of months.

The future Taco Bell drive-thru would still need to receive a conditional use permit and design review approval from the city in the future when plans are completed -- assuming the PUD modification passes.

* Feb. 12 marked the commission's only meeting of the month, with its second meeting (originally scheduled for this Wednesday) canceled due to lack of business on the agenda. The next commission meeting is set for March 11.

Ah, but what if it is a bridge to nowhere??

Looking forward to a bar with a pool table again :) Love the Throw Back Vibe!! Seems like this sleepy town is waking up and coming alive. We need more of this CHEERS!

Report Objectionable Content
Email Town Square Moderator
9 people like this
Posted by Eric
a resident of Another Pleasanton neighborhood
on Feb 27, 2020 at 4:12 pm

The Oil Changers is already a drive thru so there is precedent for the location already. It’s a moot point. Look at google earth, there are entry and exit arrows painted on the pavement. Drive thru has already been allowed for a very long time.

Report Objectionable Content
Email Town Square Moderator
10 people like this
Posted by Grumpy
a resident of Vineyard Avenue
on Feb 27, 2020 at 4:28 pm

Wait, we’ll be able to drive through the center of the Taco Bell? Like pass through the kitchen, pull up to the fryer and grab what we want?

Report Objectionable Content
Email Town Square Moderator
2 people like this
Posted by Tom
a resident of Birdland
on Mar 4, 2020 at 10:10 am

Get Real....just what Pleasanton needs is another Bar!!
Poor planning ..bad way of making money for the City of Pleasanton.

Report Objectionable Content
Email Town Square Moderator
2 people like this
Posted by dknute
a resident of Golden Eagle
on Mar 4, 2020 at 11:07 am

I think we need to get over the Lack of Parking Downtown...or anywhere near Retail business, for that matter..the City is going to Grow. Traffic is always going to get heavier...It's called Progress. Our City is Planned Progress and Slow Growth is Built in due to the Process,,,,All the Processes, I should say. All the Processes Guarantee that this City will Not Grow beyond it's ability to take care of the inhabitants ....The Process is to make anything "not that easy to obtain" and it's working. Lots of Council meeting, Lots of Staff Time, Lots of Planning Commission, Lots of Public Input, lots of Schools, better library facilities, and Better Roads. It's a price to pay to get parking. We're concerned that people will have to walk, if parking structures are too far from the downtown, yet, look around...there are always walking and running events, closing the roads downtown...LOL...it's pretty funny when you think about it, but it's still the best place to live!..Keep up the Good work, Pleasanton...I love it and i'm sure i'm not alone in that category. now, if i can just solve this verification code:

The first few seconds after awakening; before I remember the virus
By Chandrama Anderson | 0 comments | 3,131 views