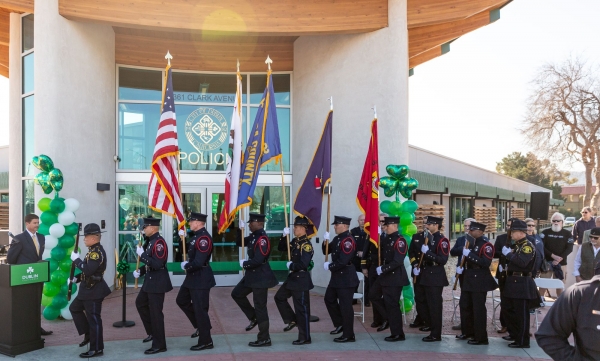 Dublin community leaders and residents joined together Saturday for the ceremonial opening of the city’s new Public Safety Complex. (Photo courtesy of city of Dublin) 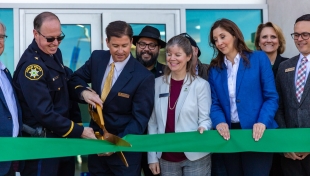 The Dublin community gathered for the grand opening of its new police headquarters last Saturday, two years after construction on the complex started.

Located at the corner of Dublin Boulevard and Clark Avenue, the new Public Safety Complex, as it is officially known, houses essential functions like Dublin Police Services administration and an expanded Emergency Operations Center that is much larger than the former one at Dublin Civic Center.

There is also a briefing and training room and administrative offices for Alameda County Fire Department personnel onsite. Staff moved in during 2014 and temporarily relocated while the part of the building serving Dublin police was being built.

Construction of the $15 million project involved the demolition of two buildings and renovating and rebuilding two others.

"Not only is the new Public Safety Complex beautiful, but it was built with state-of-the-art, environmentally conscious features that will make it eligible for LEED (Leadership in Energy and Environmental Design) Platinum Status," Mayor David Haubert told the Weekly.

"This new building will also provide Dublin Police and Fire with the space they need to grow to continue doing the excellent work that they do in keeping Dublin residents and visitors safe," he added.

The 17-foot-high aluminum sculpture by Napa artist Gordon Huether features inlaid blue and red dichroic glass and the words "commitment," "honor," "integrity" and "trust". It is meant to serve as a metaphor for police and firefighters, according to city officials, and "to remind the public of the mission and values of both departments."

As for the former Dublin police headquarters at the Dublin Civic Center, the lower level will be transformed into a future Cultural Arts Center while the city's Parks and Community Services Department staff will move into the upper level.

The first few seconds after awakening; before I remember the virus
By Chandrama Anderson | 0 comments | 3,136 views