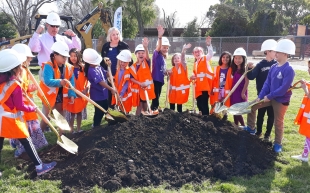 "More than three years after..." and you just got around to this. AND YOU WANT MORE MONEY!!!

More importantly, should not have been first priority. No added capacity.

Kiko, you must be aware that the measure only authorized issuing bonds, right? Once it was passed, the bond agreement had to be drafted, the bonds had to be put on the market and sold, project proposals had to be drafted, subjected to public scrutiny and comment, revised, reviewed again and approved, contractors have to submit their bids, bids are reviewed and selected, work had to be scheduled based on contractor availability, and then (in theory) work can finally begin. So long as the neighbors don't raise too much of a stink and torpedo projects with environmental impact audits. No wonder it takes years to build anything in this town.

Of course, you knew all of that before you commented, I'm sure.

Report Objectionable Content
Email Town Square Moderator
11 people like this
Posted by Kathleen Ruegsegger
a resident of Vintage Hills
on Feb 17, 2020 at 3:42 pm

Report Objectionable Content
Email Town Square Moderator
8 people like this
Posted by Kiko
a resident of Val Vista
on Feb 17, 2020 at 4:24 pm

And Sally’s point is exactly what ?

Report Objectionable Content
Email Town Square Moderator
7 people like this
Posted by Fisher
a resident of Avignon
on Feb 18, 2020 at 6:10 am

So long as the neighbors don't raise too much Web Link a stink and torpedo projects with environmental impact audits.

Report Objectionable Content
Email Town Square Moderator
15 people like this
Posted by Sally
a resident of Foothill Place
on Feb 18, 2020 at 3:46 pm

Well Kiko, since reading comprehension is evidently not your strong suit, I'll lay it out for you plainly: there are lots of reasons why construction projects take a long time, especially municipal ones, without needing to blame the laziness of some nameless bureaucrat. You want it to improve? Lobby to remove or streamline municipal building oversight rules. Or just continue to gripe. No skin off my ass.

Report Objectionable Content
Email Town Square Moderator
7 people like this
Posted by Kiko
a resident of Val Vista
on Feb 18, 2020 at 5:31 pm

Sally..."No skin off my a**". Three years for a crap project that isn't fixing the schools, Ya, I will gripe and complain and not vote for anymore tax increases.

Report Objectionable Content
Email Town Square Moderator
6 people like this
Posted by Map
a resident of Del Prado
on Feb 19, 2020 at 6:23 pm

Still not the new school we need, still voting NO on M. all I see is smoke and mirrors with this PUSD they would make a great Vegas act!!