Amador Valley, Foothill heading to Washington, D.C. for We the People nationals 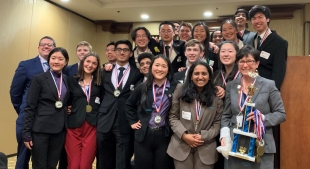 Amador Valley High School's competitive civics team (pictured) recently qualified for the We the People High School National Finals in Washington D.C. this spring. The team has advanced to finals for the past four consecutive years. (Photo courtesy of PUSD)

These dedicated young adults and their teachers are fundraising for this trip. I hope all who are able to do so will contribute to show our support as they represent our community.