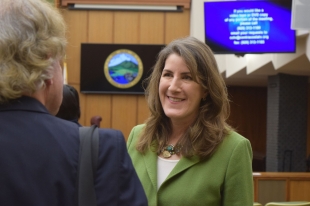 Former state assemblywoman Catharine Baker is one of six applicants to be interviewed next week to become the next Contra Costa County clerk-recorder. (Photo by Sam Richards/BCN Foundation)

What is community worth to you?
Support local journalism.
Join

I'm a democrat who thought republican Catharine Baker did a good job representing our district. BUT, I find it worrisome that while in office, her bio and Web site she did not mention her role as a "member of the Federalist Society's San Francisco Board of Directors and Silicon Valley steering committee." I think elected officials, or someone in the position of overseeing elections, should be 100% transparent about leadership-level positions, past or present, with legal organizations. (The only way I learned of her roles with the Federalist Society was via a 2014 Businesswire press release from her former employer, Hoge Fenton.) The Federalist Society has played an influential role in the judicial selection process of the current president.

It is good that the current President is cleaning house!
It is long past due to replace the "ultra bleeding heart liberal activist" judges.
It is time to appoint judges that will rule on matter of law, not their personal preference.

Whatever her politics. I agree she should be transparent about it.

Report Objectionable Content
Email Town Square Moderator
4 people like this
Posted by Michael Austin
a resident of Pleasanton Meadows
on Jan 16, 2020 at 6:37 pm

As anonymous poster 125 pointed out, it was in the 2014 business wire press release.
Isn't that transparency?

Tell Me More About University of California-Merced
By Elizabeth LaScala | 2 comments | 1,657 views

If not us, who?
Support local journalism.
Join