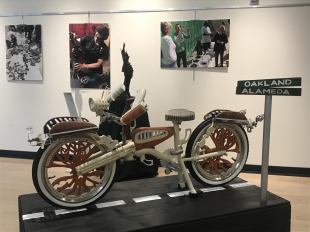 This artwork is among the pieces created by local artists using dismantled firearms as part of the collaborate project "Art of Peace." (Photo by Cierra Martinez)


"An art project seeking to engage residents throughout the community in critical thinking and analysis of gun violence..."

Time for some "critical thinking and analysis" for journalists/district attorneys/etc. on this issue. There is no such thing as "gun violence". It's a political propaganda term used by the left to blame society for violent behavior and to justify more gun laws/bans for law abiding people.

Firearms, which have been available/legal to own in our society for years, do not commit acts of violence, they are not germs that cause disease that the CDC needs to study, etc. No one is being forced against his/her will to misuse them. The overwhelming number of firearms owned and in circulation in our nation are never misused/used responsibly/used defensively. Millions of people have permits to carry guns - and do not commit crimes/break the law with them.

Amazing that people who ask others for "analysis" on this issue are unable to do so on their own. Instead they assign human/emotional qualities to inanimate objects, regularly blame law abiding gun owners having nothing to do with violence for somehow "not doing enough" to prevent it, and treat the people who deliberately misuse firearms (already against the law) as helpless bystanders or victims of the gun manufacturers, gun shows at the Cow Palace, business owners wanting to operate gun shops, and supporters of the 2nd Amendment of the Constitution.

Criminals will line up to view these exhibits and suddenly stop misusing guns? I don't think so. Does anyone else think they will? Expect more lawless behavior in our society with reasoning like this, not less.


"Gun violence plagues our communities. The Art of Peace focuses a spotlight on our ongoing efforts to end this crisis," District Attorney Nancy O'Malley said in a statement.

A spotlight? More like a penlight (or a lit match) being focused instead.

Will people who violate firearms laws in Alameda County be sentenced to view these exhibits as part of a "diversionary" or "rehabilitation" program? Will criminals be paroled/granted an early release from jail if the gun(s) they used in a crime are part of the exhibits? Will defendants be allowed to claim that more exhibits of this type not being available to view "caused" them to abuse firearms - and therefore should not be held accountable for their actions?

Not expecting this crisis to end anytime soon - until the "blame society" and "everyone is a victim" mentality from so called progressives is finally exposed as a criminal justice failure.

Report Objectionable Content
Email Town Square Moderator
6 people like this
Posted by Livermore Patriot
a resident of Livermore
on Jul 26, 2018 at 9:53 am

Why doesn't District Attorney Nancy O'Malley use our taxpayer dollars to commission an art exhibit about her taking a $10,000 campaign donation from the Fremont Police Union whose president, Sgt. Jeremy Miskella, was then being investigated by her in a fatal shooting of pregnant teen Elena Mondragon. (After the donation he and others were cleared.) .
[Portion removed due to promoting a website]


Report Objectionable Content
Email Town Square Moderator
22 people like this
Posted by Robert Adam
a resident of Del Prado
on Jul 27, 2018 at 8:23 pm

There goes MichaelB pretending to be a "law abiding citizen". Good thing we know better. He's nothing more than a troll fixated on this little website.

Report Objectionable Content
Email Town Square Moderator
24 people like this
Posted by BobB
a resident of Another Pleasanton neighborhood
on Jul 27, 2018 at 8:32 pm

BobB is a registered user.


Of course there is such a thing as "gun violence". That's violence where a gun or guns were used.

There is no such thing as "gun rights".

Report Objectionable Content
Email Town Square Moderator
26 people like this
Posted by BobB
a resident of Another Pleasanton neighborhood
on Jul 27, 2018 at 8:33 pm

BobB is a registered user.


Possessing a gun is a privilege, not a right.


"Of course there is such a thing as "gun violence". That's violence where a gun or guns were used."

Nice try BobB. Now you can explain why so called "progressives" want the Centers for Disease Control to "study" it (when there is no disease or illness involved). And why new gun regulations/bans are being proposed every year in this state - for those having nothing to do with violence.

Report Objectionable Content
Email Town Square Moderator
6 people like this
Posted by Robert Adam
a resident of Del Prado
on Jul 29, 2018 at 1:42 pm

Here is why the CDC wants to study gun deaths:

MARK ROSENBERG: "Science had brought the death rate in car crashes way, way down. And they didn't have to ban cars. And we said, let's find ways to save lives from gun deaths. And we can do that without banning guns."


Here's what we are not hearing about the so called "research":

As Reason documented at length back in 1997, CDC and other public-health research on guns had these problems of bias and shoddiness in spades:

Serious scholars have been criticizing the CDC’s “public health” approach to gun research for years. In a presentation at the American Society of Criminology‘s 1994 meeting, for example, University of Illinois sociologist David Bordua and epidemiologist David Cowan called the public health literature on guns “advocacy based on political beliefs rather than scientific fact.” Bordua and Cowan noted that The New England Journal of Medicine and the Journal of the American Medical Association, the main outlets for CDC-funded studies of firearms, are consistent supporters of strict gun control. They found that “reports with findings not supporting the position of the journal are rarely cited,” “little is cited from the criminological or sociological field,” and the articles that are cited “are almost always by medical or public health researchers.”

Report Objectionable Content
Email Town Square Moderator
10 people like this
Posted by Robert Adam
a resident of Del Prado
on Jul 29, 2018 at 2:05 pm

Trump signed it earlier this year....yep, your boy did this to you. Your country is under attack by the White House. Why aren't you grabbing your gun and storming the place? Isn't that what you've been claiming the 2nd Amendment is for? It's happening right now! Here's the link to the article I quoted earlier, easy to Google anyway: