Sale closes ahead of Jewish New Year next week 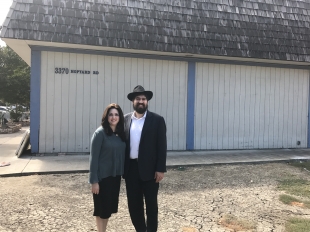 Rabbi Raleigh Resnick and his wife Fruma outside the new Chabad Center for Jewish Life on Hopyard Road. The Chabad of the Tri-Valley closed its purchase of the former masonic lodge last week. (Photo by Jeremy Walsh)

This certainly seems like good news. Let's hope they plan on investing in the outside of the facility as well, because frankly it's a dump.
I would hope the Planning Commission and city plan on requiring substantial exterior improvements (repair the siding, replace the landscaping, etc.) making that a condition of approval for whatever permits they will need.