Get thee to 'The Winter's Tale' today | News | PleasantonWeekly.com |

Get thee to 'The Winter's Tale' today 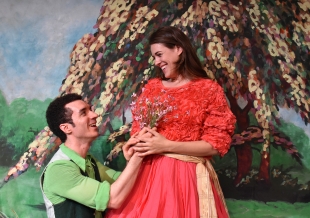 Davern Wright (left) as Florizel and Rosie Hallett as Perdita in San Francisco Shakespeare Festival's Free Shakespeare in the Park production of "The Winter's Tale." (Photo by Jay Yamada).

This year's production is "The Winter's Tale," a heartbreaking story that is also gloriously funny. The crowning achievement of William Shakespeare's late career, the tale swoops across continents, generations and genres to its bittersweet conclusion, and the play culminates with the writer's most famous stage direction: "Exit, pursued by a bear."

"'The Winter's Tale' was written in 1611. It was one of his last plays, and it brings together so many strands of what he was doing," said artistic director Rebecca J. Ennals, who is committed to a cast at least 50% women and 50% actors of color.

"It has Mama Bear and Papa Bear and Baby Bear talking about coming to see Shakespeare in the Park," Ennals explained. "It is a family approach, perfect for young kids, even if they are 5 years old."

She said they spend a lot of time discussing how to make their productions good for families and children.

"It has lots of physical comedy, lots of dancing and music," Ennals said. "It begins with a dance, there is a dance in the middle, and it ends with a dance."

She also noted that although "The Winter's Tale" contains tragedy, it is in the beginning, unlike last year's "Romeo and Juliet," which ended in tragedy. Some families last year left during the intermission.

"This year I encourage parents to keep the kids there -- it will get very funny," Ennals said.

In the first half of "The Winter's Tale," King Leontes of Sicilia trusts his own paranoid beliefs against all evidence to the contrary and plunges his kingdom into a chain of tragedies. But in the play's darkest hour, a baby girl survives to grow up in the happy kingdom of Bohemia, unaware of her noble past.

Thanks to the wisdom of his loyal servant Paulina, Leontes learns that although not all losses can be reversed, redemption is possible.

Ennals noted that this year is the 400th anniversary of William Shakespeare's death.

"We had a big celebration on April 23, and all year long it is in everyone's thoughts," she said. "It is a really good year to be doing this play."

"The best thing about Pleasanton is that people have the tradition of coming early in the morning and putting out blankets to reserve their spots," she said. "We don't see that as much elsewhere."

People bring their own blankets and chairs, and sections are delineated for the taller chairs in the back.

"People in Pleasanton bring glorious picnics," Ennals said. "People really do it up -- they bring tables and it's like a big party. It's really wonderful to see."

Some clothing with the Shakespeare Festival logo will be for sale in the park, as well as some drinks and chips, with proceeds going toward expenses.

If you can't prepare a meal, Ennals recommends walking to the nearby shopping center as she does during rehearsals.

After weeks of training in their San Francisco studio, the Shakespeare company will be rolling into town a week early to begin on-site rehearsals from Tuesday to Friday. Often, people strolling by will stop for a few minutes to observe.

"There was a little boy last year, walking in the park with his grandfather who didn't speak English, and every night he sat there on the grass and watched the play," Ennals recalled. "I started watching him to see, 'Does this play work for a 5-year-old?' I started noticing, 'Is he laughing?' I hope he comes back this year."

This year's show opens July 2 with a preview, which Ennals explains traditionally has cheaper tickets because the play is still in some rehearsal stages.

"We will be as close as we can to being perfectly done on July 2," Ennals said, "but the technically complete show is Sunday."

Ennals, who joined the company in 2002 in marketing, said she has done other acting and directing but always comes back to Shakespeare.

"When I was 5 years old, I went to 'A Midsummer Night's Dream,' and I was hooked. It's been a lifelong love affair," she said. "I've diverted into other types of theater, but I return to Shakespeare."

San Francisco Shakespeare Festival, which also offers Shakespeare camps and a school library tour, began its Shakespeare in the Park performances in 1989 with "The Tempest." It has been performing in Pleasanton since 2000.

"We value the relationship we have with the San Francisco Shakespeare Festival and enjoy working with them to bring these productions to the community," Pleasanton community services manager Michele Crose said.

"We frequently hear that people love coming to the shows each year and that they do return year after year," she said. "We also hear how much the families love coming together and spending time with each other while picnicking and enjoying the show."

Shakespeare in the Park harkens back to the origins of the plays it presents, since they were originally given during the daytime in London's Globe Theatre in open air.

"I think the great thing about Shakespeare in the Park is that everybody can come," Ennals said. "Famously, at the Globe, you could pay a penny; 70-80% of the people went to the theater in London. We strive for that."

Shakespeare in the Park

What: "The Winter's Tale"

Other: "Shakesbear's Picnic" at 7 p.m., a 15-minute show that provides context and historical background for the play in a fun, family-friendly format.

When Shakespeare died in 1616, about half of his plays had been printed, in small one-play editions. Another 18 plays have survived -- including "The Winter's Tale" -- because they were included in the "1623 First Folio," the first collected edition of his plays.

To commemorate the 400th anniversary of Shakespeare's death, the Folger Shakespeare Library in Washington, D.C., has organized a national tour of "First Folio! The Book that Gave Us Shakespeare." The volume will travel to every state as well as Washington, D.C., and Puerto Rico, beginning with San Diego (now through July 7), where it will be on display free of charge at the San Diego Central Library.

Researchers believe that 750 or fewer copies of the "First Folio" were printed; 235 survive today, of which 82 are in the Folger collection, according to its website. Each one is slightly different, partly because the proofreading took place at the same time as the printing.

The first few seconds after awakening; before I remember the virus
By Chandrama Anderson | 0 comments | 3,137 views