﻿ A privilege to know him | Around the Valley | Gina Channell Wilcox | PleasantonWeekly.com |

A privilege to know him 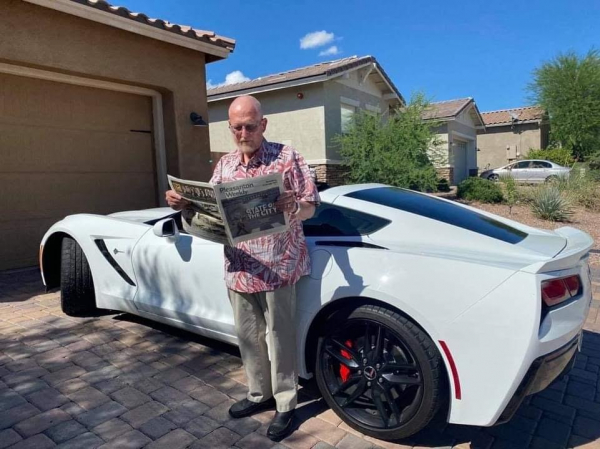 Jerry Thorne lived most of his life in Northern California but he never lost the folksy, gentlemanly ways of the South where he was raised.

Thorne, a former Pleasanton councilman and four-term mayor during the 2010s, died unexpectedly at his Arizona home Sunday at the age of 77.

He moved from Tennessee to Pleasanton in his 20s, after graduating from the University of Tennessee at Memphis with a degree in chemical engineering.

Even with decades on the West Coast, Jerry never lost his Southern manners (or the drawl), which served him well as he led Pleasanton during a particularly turbulent time of growth. Many meetings were heated and long in a city where the residents wanted a housing cap that the state said they couldn’t have.

“Thorne was savvy, gregarious and affable, whether on Main Street or at meetings,” said Pleasanton Weekly Founding Editor Jeb Bing who spent many nights in City Council Chambers covering meetings. “His mission was always to make Pleasanton the safe, inclusive community it has become. He was a conciliator whether dealing with anti-war protesters at City Council meetings or handling backyard over-the-fence disputes.”

When I think of “Mayor Thorne,” I remember the respect he showed everyone – our staff, residents, commenters during public meetings and his fellow council members among the many. He could be the most patient person, but he could take or retake control of a meeting when needed – in a calm, considerate manner, of course. He explained his decisions in a logical manner and invited alternative views. He was not afraid to discuss and debate ideas, which is something being lost in the political arena today.

“Jerry was more action than words, which made him a rarer breed because he wasn’t a typical glad-handing politician,” said Kathy Narum, who served with Thorne on the Pleasanton City Council and as his campaign manager before that.

“He was more focused on getting things done for the community that he loved so much, and he could be tenacious about it. This is why people loved him,” Kathy said. “But as his campaign manager, it was a challenge when it came to the campaigning part and knocking on doors. He had an innate modesty that made knocking on doors and idle chit-chat difficult for him, but he came to appreciate that residents really did want to talk to him.”

This humility is a characteristic that goes along with the Southern manners Jerry exuded. When I think of Jerry the person and friend, I remember how he would go out of his way to make everyone he encountered feel valued and heard. I also think of his firm handshake and fierce love for his community and country, its residents and his family – traits also part and parcel with the ways of the South.

“I remember one time we were out walking and knocking on doors, and one of the doors was opened by Terry Beaty,” Kathy said. “They got to talking and Terry yells over his shoulder to his wife Kim that Jerry Thorne was at the door and he brings Jerry inside.I wasn’t sure what to do. After about 15 minutes, Jerry came out absolutely beaming.”

It turns out Jerry had welcomed home their son at a homecoming hosted by Pleasanton Military Families, of which Jerry was a huge supporter, and they hadn’t forgotten.

“Those were the moments that Jerry lived for,” Kathy continued. “He was so pleased that he’d made a difference in the life of a soldier and his family. That was my friend Jerry, who dedicated the last 25 years of his life to improving the lives of others.”

“Jerry Thorne was like the neighbor you wish you had, the neighbor who helped whenever he saw a need,” Jeb said. “The neighbor who greeted you like he was genuinely happy to see you. The person you could effortlessly spend a day with. I alway felt welcome, both in his home and at community events.”

Besides covering many of the City Council meetings, Jeb spent time with Jerry “countless other times at community dinners, public events, victory parties, veteran homecomings and most always came away with great material.”

“I especially remember the conversations we had about his pre-dawn trips to the Aquatic Center and the excitement he had when his daughter Kari got her driver’s license,” Jeb said. “That ended his many years driving her to Seahawks swimming practices at 5 a.m.”

It was at that aquatic center Jerry got his start in city politics years when he volunteered to help the Seahawks swim club and their members' and supporters' bring a 50-meter pool to the city's aquatic center.

Jerry cut the ribbon at the pool as a Parks and Recreation commissioner, and spent 10 years on that commission before being elected to the City Council in 2005 and re-elected in 2006 and 2010. He won his first of four consecutive two-year terms in 2012.

“He was a bright light following years of political turmoil after the late mayor Ken Mercer rescued the city from economic problems as a result of Prop 13,” Jeb said. “The next mayor, the late Ben Tarver, unsuccessfully opposed the development of Hacienda Business Park and Ruby Hill. Mayor Tom Pico supported no-growth efforts. Mayor Jennifer Hosterman had bitter relations with Livermore and county board commissioner Scott Haggerty over developments on Staples Ranch,” Jeb continued.

“Thorne resolved those issues, developing close ties with neighboring cities, the county and even federal legislators. It was a privilege to know Jerry and he will surely be missed.”

Jerry leaves good memories and life lessons for his friends and family; Mayor Thorne leaves the city and region stronger.

It was indeed a privilege to know Jerry Thorne, and he will be missed.


Over the years I had conversations with members of the council and mayor Thorne. I asked all of them to consider paying down the city debt.

When Jerry was reelected, I sent him another email asking him again to consider paying down the city debt. Soon after, mayor Thorne did pay down city debt.

I was blasted by a poster in the Weekly Twon Square identifying himself as Georgia Peach, for giving Jerry Thorne credit for paying down Pleasanton city debt.

Mayor Thorne was responsible for the discussions that led to the pay down of the city debt. That pay down of debt saved the city millions of $$ down the road.

What it takes to become a teacher
By Monith Ilavarasan | 1 comment | 1,062 views