CityServe helps give a Pleasanton vet a fresh start

Uploaded: Nov 20, 2018
CityServe of the Tri-Valley introduced Desert Storm/Shield veteran Dominic Prodenzola of Pleasanton to people attending its sixth annual Tri-Valley Prayer Breakfast at the Doubletree Hotel.
Dominic shared some of his story as a stay-at-home dad for his 8-year-old daughter Samantha during Monday’s program. After serving in the Army—he enlisted at 17 with his mother signing his papers—he took several years before recognizing that he was suffering from Post-Traumatic Stress Syndrome (PTSD). He has a 50 percent disability retirement from the Army and was working as an EMT for several years before he recognized that was triggering symptoms.
He told attendees that his marriage unraveled over the past three years (his parents were also divorced). So, he settled with his ex-wife by giving her the house and the car, so he could share custody of their daughter. When the New Year dawned, he was homeless and started living in his car. Over the next few months, he and Samantha were helped by several churches in the valley.
By late summer, he knew he needed help, so he called the United Way’s 211 referral service. They suggested CityServe of the Tri-Valley and two days later he met with Gloria Gregory, the executive director.
Gloria arranged for a hotel room for a week and gave him a gas card and supermarket card for groceries. She also arranged a meeting with Livermore’s Housing and Urban Development office which eventually gave him the first veteran’s housing voucher (like a Section 8 voucher for low income people). 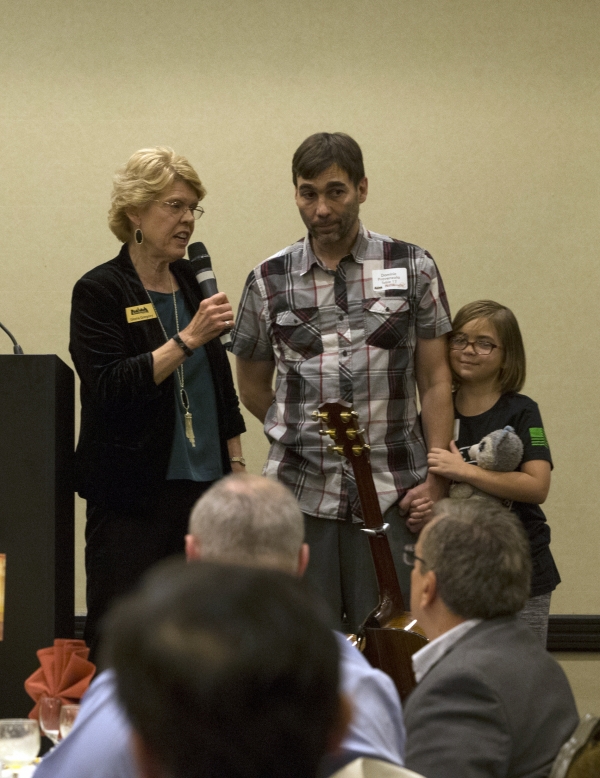 When I visited with Dominic after the event, said he has tried to use the voucher in Livermore, but has yet to find a landlord who would accept it. He’s hoping for a “patriot” who will rent to a veteran.
He’s also planning to return to school full-time at Las Positas College to train as a sonogram tech, figuring that giving happy news to pregnant ladies was be a better fit for his medical skills than an EMT. The VA will pay him a monthly stipend, so he can retrain for that job.
The next step will be working with a community care advocate, a trained volunteer from a local church who will walk with him to help his transition to a sustainable life.
Jill Lortentz, the CityServe team member heading that program, said she has 40 trained volunteers working with people after they get through the crisis.
During the program, Gloria said her office is receiving 2-3 calls daily from people dealing with homelessness or the potential of it. CityServe has focused its efforts on people in crisis, helping with cash, gift cards and referrals to help stabilize housing and transportation. A leading cause here in the valley, she said, is families breaking up.
Speaking to the crowd, Dominic recalled what an Army drill instructor had told him about survival training. It was dehydration that killed people who were lost—it was their pride that kept them thinking they could figure it out themselves. Dominic advised that it was his pride that kept him from reaching out for help until it was almost too late.
For info about CityServe

CityServe Of The Tri-Valley: Web Link

A very important service to the Tri-Valley - This is what makes AMERICA GREAT!


Report Objectionable Content
Posted by unblocked games 66 at school, a resident of California Reflections,
on Jan 20, 2019 at 6:19 pm


Everything is very open with a very clear explanation of the challenges. It was truly informative

Report Objectionable Content
Posted by cinemark, a resident of San Ramon,
on Jan 23, 2019 at 4:26 am
cinemark is a registered user.


Wow thats a really informative post thats for sharing with us

Report Objectionable Content
Posted by armor games com, a resident of Danville,
on Feb 17, 2019 at 5:36 pm


I was suggested this blog by means of my bro. I am not sure whether or not this publish is written by means of him as no one else understand such precise about my problem. You're wonderful! Thanks! Web Link

The future of homework
By Monith Ilavarasan | 0 comments | 911 views