Uploaded: Oct 18, 2018
When Todd Utikal and his wife celebrated milestones at Skip Hinsley's Girasole restaurant, he never imagined that years later they would be business partners in downtown Pleasanton's newest restaurant.

They are scheduled to open SideTrack Bar + Grill later this month and will be participating in the Pleasanton Downtown Association's Brew Crawl on Saturday, Oct. 27. It's a total rebuild of the former Joy restaurant at 30 West Angela St.

Skip operated Girasole for many years in the strip shopping center at Santa Rita Road and West Las Positas Boulevard. He also owned a catering business.

Todd and his wife went to Girasole on their first date and also went there the night they learned the gender of their first daughter. Todd said he knew of Skip through Rotary and other community activities, but they had never met.

When he planned to open a restaurant, he promised his wife he would find an experienced restaurateur as a partner. Todd reached out to Skip with a Facebook message as Skip was headed to his new home in Tucson. They talked, and, after a few half-day meetings, Todd convinced Skip, 72, to get back into the business. 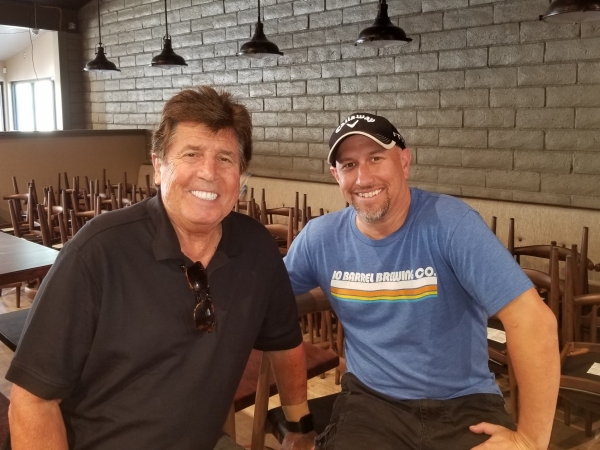 They started by nailing down the lease with landlord Larry McColm, who was trying to win city approval for a three-story building with two floors of apartments over the restaurant. McColm eventually abandoned those plans and moved ahead with the "remodel." While that was going on, Todd raised money from local investors and obtained a small business loan. By the time they open this month, they estimate about $1.5 million will have been invested in the building.

They were educated in different fields -- Skip is a licensed lawyer and also holds an MBA from Dartmouth. Todd graduated with an accounting major. Instead of practicing accounting, he got into the cruise industry (he still has a small business booking tours for longtime clients) and became the youngest assistant cruise director for a major line. Skip joined Frankie, Luigi and Johnny's for a short-term project and 11 years later he was running four restaurants.

What they share is they love making people happy, and that's their bottom line at SideTrack. The name and theme are based on the former Trans-Continental Railroad line located next to the restaurant.

Their goal is a family-friendly establishment with great hamburgers where dad can get a craft brew or a cocktail and mom has a wide choice of wines. Working with Skip's longtime chef Bert Ortiz, they spent a couple of weeks taste-testing burger blends on a gas grill set up in Todd's backyard. The menu includes seven beef burgers plus a black bean veggie burger and a portobella mushroom burger.

In addition to the burgers, there will be a variety of small plates and entrees, including a few favorites from Girasole. That includes Scoozi, the garlic-laden cheese-stuffed buns as well as Absolut Prawns and Spinach for Veronica. It will reflect cultural diversity with dishes such as the Sonoran Street Taco Trio, Thai Chili Chicken Wings and Oaxaca Nachos.

When they open, the menu will be the same for lunch and dinner. In addition to the burgers and entree salads, they will offer deli-style sandwiches including two corned beef sandwiches with beef procured from a small San Francisco firm. Located next to the Saturday Farmers' Market, they will expand into a weekend brunch and then broaden the dinner menu with prime rib and other hearty entrees.

The restaurant seats about 140 with 55 seats on the two patios, one facing West Angela and the other facing the parking lot. The patios are equipped with gas heaters, so they should be usable year-round. There will be a few big screens for the ball games, but they emphasize that this is not a sports bar. This month, they've been busy hiring staff -- some are familiar to Skip from his prior ventures.

Handling the chef duties will be Victor Escamilla, an Amador Valley High grad. He's started cooking in downtown Pleasanton and has worked at Piatti's in Danville, the Blackhawk Grille and the Pleasanton Hotel.

When the first customer is seated, it will mark the end of three years of work and 13 months of construction and the start of making people happy. Fittingly, an empty eyesore will be reborn as another downtown restaurant.

The future of homework
By Monith Ilavarasan | 0 comments | 965 views