Wrapping up a 100-year-old detective job

Uploaded: Jun 21, 2018
Retired Alameda County law enforcement officers completed an important two-year detective project when they dedicated the headstone on the previously unmarked grave of a sheriff’s deputy killed in the line of duty.

Ret. Lt. Jim Knudsen spearheaded the detective work along with two retired Oakland officers. They found 10 of the 91 officers killed in the line of duty were buried in unmarked graves. They launched the Heroes Grave Project to rectify the situation.

When the Bay Counties Peace Officers Association gathered for lunch in Fremont last week, it was held at the Irvington Presbyterian Church, located across the street from one of the oldest graveyards in the county, the Irvington Memorial Cemetery.

They honored Alameda County Sheriff’s Deputy Daniel Cameron who was one of five officers killed on July 18, 1898. The four Oakland officers received a funeral procession, while there was little record of what happened to Cameron’s remains.

Knudsen located the graves of Cameron’s parents, who were well-known in the Centerville area, in the Irvington cemetery. The grave records were 3x5 cards that are 120 years old. He found the records for the parents, who have headstones on their final resting place and there was an unmarked grave next to them.

He found what he thought was a blank card, but when he and the cemetery manager took a closer look, they found faint writing (in pencil) of the deputy’s middle name. 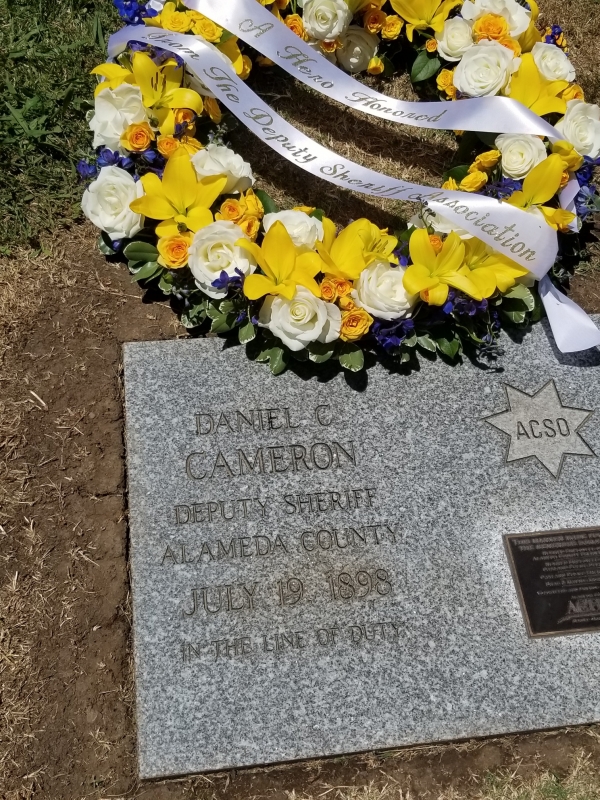 So, with the site located, the project had the gravestone engraved and placed for dedication last Wednesday. Alameda County Sheriff Greg Ahern, Fremont Police Chief Richard Lucero (decked out in his dress blues as were other Fremont officers) and the Rev. Dr. Larry Thorson spoke at the event. The reverend finished the short ceremony with a prayer.

Marking the deputy’s grave completed the project. Thanks to Knudsen and the Oakland officers who spearheaded it.

Incidentally, Knudsen noted that the association, which meets a few times each year, dates to the days when Earl Warren (yes, the Supreme Court Chief Justice) was the District Attorney of Alameda County. He served from 1925-1939 before winning election as the state Attorney General. He then won three terms as governor, serving halfway through his third term when he was appointed Chief Justice by President Dwight Eisenhower.


What a worthwhile endeavor. Our heroes deserve all the honor and respect we can give them.

Report Objectionable Content
Posted by Ron Capilla, a resident of Castlewood,
on Jun 22, 2018 at 8:26 am


What a great story. Thank you Jim Knudsen and the other officers for making this happen through all of your hard work.

Report Objectionable Content
Posted by Cholo, a resident of Livermore,
on Jun 22, 2018 at 2:15 pm


GRACIAS! This is what I call a very GOOD DEED!


It's really fantastic post, that you had done here. I like and appreciate this for this article please keep it up

Report Objectionable Content
Posted by Jaipur Escorts, a resident of Village High School,
on Sep 12, 2018 at 11:10 pm
Jaipur Escorts is a registered user.


I have read out this article, I was justing surfing on it and I read your article, terribly great man the content is too awesome.
http://www.gurgaoncallgirls.in

Doing more with the natural spaces we have
By Sherry Listgarten | 3 comments | 1,740 views