She worked with other small business people from across the country on the small council, sharing how the Fair uses Facebook and learning about how other businesses use it plus exploring the Facebook tools
available. Facebook selects members annually to serve for one year. Never did she expect that her experience there would lead to a Facebook birthday fundraiser that she ran for an Arkansas organization serving battered women.

Last week, Angel was invited back to Facebook to speak on a panel with seven other business women about their experiences with the social media giant on the International Women’s Day. During the panel and a lunch discussion that followed with Sheryl Sandberg, the COO of Facebook, women shared how they supported other women and the subject of birthday fundraisers came up. 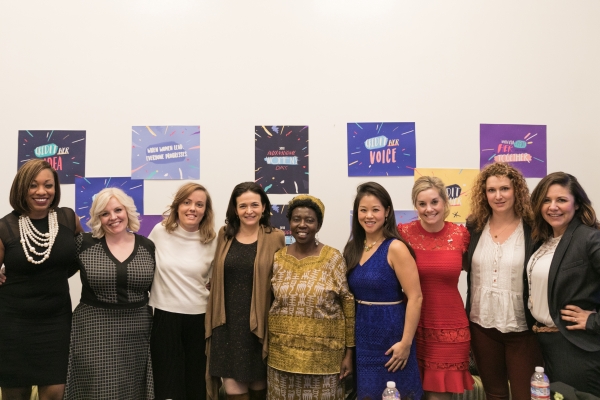 One participant from Little Rock, AK, shared about the fundraiser that she was doing for the Women and Children First: The Center Against Family Violence. She shared that it cost $1,500 to help a woman turn her life around. The issue of family violence sadly resonates with Angel who had one friend killed and has others who have suffered through attacks.

She woke up Friday morning, after pondering the prior day’s activities, and decided to celebrate her birthday (which was Friday) with a Facebook fundraiser for the Arkansas shelter. She set the goal of saving one women and sent it out to friends and family. She confessed to being a bit nervous—why would her local friends want to support an out-of-state shelter. Was she pleasantly surprised. The fundraiser, posted mid-morning, already had raised $1,700 by 4 p.m. As of Monday, it was more than $2,500.

“The response was overwhelming,” she said. “One of my sons asked me why I was crying and I told him because I was so happy. I would have never met this woman had it not been for International Women’s Day and Facebook.”

During the lunchtime discussion, one participant from Israel described how her small group of women supporting other women started with 10 ladies and now has more than 90,000 on the Facebook group. Another group of moms from Fresno formed the “Bad Moms Club” to share tips and to support each other. The group also has grown substantially. When the hurricane and flooding hit Houston last year, the club reached out to women and connected those who needed diapers or formula.

Moms were packing up their vans and driving hours to meet other moms to deliver the products, she said.

Earlier this year, Facebook brought back members of all the councils for a reunion, sharing and learning. Moore’s 2017 team included members from upstate New York, Alaska and other communities across the United States. The council allows Facebook staffers to learn how users are building their businesses with the social media platform as well as training council members on what is new and being upgraded on the site.

Self-taught on Facebook, Moore loves to share what she’s learned. She invites small business people interested in learning more about how to use Facebook and other social media to reach out to her directly or tap into Facebook’s Blueprint online training program.

Teaching herself is nothing new for Angel. She started as the fair as a receptionist and then moved to the marketing department (with no experience) as a coordinator. From there, she’s worked her way up to now direct all marketing for the fairgrounds and the annual county fair.

That assignment includes plenty of advertising on a variety of platforms—radio, television, print and social media. The fair’s surveys show that Facebook is the No. 1 way fairgoers hear about the annual event and Instagram is No. 4. The fair now has more than 100,000 followers on Facebook and uses a variety of its capabilities to promote events during the 20-day run of the fair.

In her blog about the event, Sandberg wrote, “Angel said that since she got on Facebook, the county fair has hired 25 more employees to keep up with a major jump in ticket sales.”

The future of homework
By Monith Ilavarasan | 0 comments | 965 views