Uploaded: Nov 21, 2017
CityServe of the Tri-Valley presented an inspiring program at its fifth annual Tri-Valley Prayer breakfast Monday in Pleasanton.
The event served as an opportunity to both report back on activities and inspire with success stories. The testimony presented on video and live was compelling as was the one sitting at my table with Dublin Mayor David Haubert, fellow councilmembers Don Biddle and Melissa Hernandez; Livermore Mayor John Marchand; and Dublin city manager and assistant city manager Chris Foss and Linda Smith.
I interviewed Ron Correll, a recent client, after CityServe Executive Director Gloria Gregory gave me a snapshot of his story. A long-time resident of the valley, he had been living with his mom, who was having health challenges in the Arroyo Vista complex. When it was being rebuilt, they were relocated to a new apartment in Dublin Ranch and were paying just a Section 8 voucher rent.
Then his mom’s condition worsened, and she passed away after being in a medically induced coma for six weeks. Sadly, the government agency responsible for Section 8 refused to transfer the voucher to him and there was no way he could afford the $3,000 monthly rent. So, five years ago, he became homeless.
He’s been seeing a counselor at Axis Community Health and she recommended that he focus on getting a full-time job. Ron has a college degree and had wanted to teach. In October, he took a job with the Dublin school district as an aide. His counselor then found him a room in Livermore, but it required an $800 payment three days after he saw it. 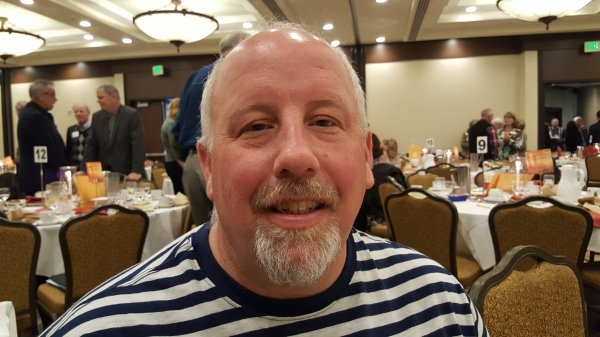 They made a call to Gloria Gregory at CityServe and she came up with the funds, so he moved in. You can see from his picture how happy he is with his new situation—a home and a job.
Helping people in situations like Ron has become the focus for CityServe as it has evolved since its founding in 2008. It was formed by pastors from several Tri-Valley churches who believed would get more done for the community by cooperating. There are 25 churches participating. Notably 91 percent of the people served are making less than 30 percent of the median income in the Tri-Valley.to
Pastor Efrem Smith gave an inspiring keynote talk about the importance of people of faith and good will collaborating and cooperating to meet the people’s needs here. He cited a statistic, that I had heard before, that predicts the incarceration rate in the future.
Check the math and reading levels of students in the fifth and third grades of school districts in socio-economically challenged neighborhoods and there’s a direct correlation. The same goes for children in foster care.
So, if you want to make a difference this holiday season and beyond, find a tutoring program serving third graders reading below grade-level and work with them. Help a student improve their reading skills and you are giving them—and society—a lifetime gift.

Report Objectionable Content
Posted by Few questions, a resident of Another Pleasanton neighborhood,
on Nov 27, 2017 at 1:23 pm


A college educated able bodied man living with his mother and he never thought to get a job? No reason on earth that the voucher should have transferred to him. He was homeless for five years before thinking about getting a job? Really?

Nice that this organization was able to help him but really, the first thought in his mind was apparently how to live for free in taxpayer subsidized housing without being employed. That's the biggest problem with section 8 and welfare, no requirement to earn it. We create a subset of people who never intend to work at all. Glad it turned out differently for this man.

Doing more with the natural spaces we have
By Sherry Listgarten | 3 comments | 1,744 views