Uploaded: Mar 28, 2017
George Bowen of Pleasanton has taken his love of music to a new level.
George started his career as a professional musician in Southern California, writing music and cutting recordings. He then transitioned to the insurance industry where he moved to Pleasanton and worked as an executive until retiring six years ago. A couple of years before retiring, he expanded his skills to making the instruments to make the music. 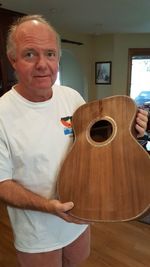 He has built two guitars and now has guitars three through six under construction in his garage with the goal of completing them in a year. He shared them with me as we talked guitars this week. George and I know each other through his City Council campaign a few years ago, and as brothers in Christ at GraceWay Church.
It’s amazingly precise work to create a hand-crafted guitar with inlaid highlights in contrasting wood and abalone shell. He sources wood from all over the world: West Africa, Germany, India, Hawaii, Brazil and the United States.
One of his more unusual guitars features a soundboard made from old-growth redwood. While being towed down the Sacramento River to be used a piling on the waterfront, the tree sank and remained under water for 130 years. Instead of the grain that typically is found in wood, the redwood shows off streaks of sediment that penetrated during its immersion.

That redwood soundboard tops the body of George’s native California species guitar. The bottom and sides are made from Claro Walnut
He starts with big pieces of wood and then, using jigs and precise tools, cuts them down and shapes them. It takes far more time to set up the equipment for a cut than the actual cutting. That’s why making four guitars at once is more efficient.
One reason he loves making guitars is that it is the opposite of what he did as an insurance executive. His business life was filled with deadlines. When he goes into his garage to work on the guitars—it is just the opposite—no deadlines and working with his hands and his head. He has designed and built some of the tools he uses to make the intricate designs and to shave down the wood.
Generally, the lighter the material in a guitar is, the better. He shaved some guitar soundboards to 88 one-thousands of an inch. For comparison, one-eighth of an inch is 125 thousandths.
George owns a variety of guitars, including some made from the traditional Brazilian rosewood. He mentioned that he could not take the rosewood guitar out of the country because custom regulations to protect the rosewood in the forests will not allow it to be imported. That limitation has invited guitar makers to broaden their woods beyond the traditional rosewood and spruce.
“The sustainability of the forests is very important. The deforestation is a big problem,” he said.
His hobby is spreading. He’s helping his neighbor build his own guitar.
For the future, he’s thinking about making an instrument using the cedar of Lebanon that may have been what King David’s lyre in the Bible was made of. He’s been a Christ follower for decades and delights in tucking away scripture in each guitar.
It’s Psalm 90:17: May the favor[a of the Lord our God rest on us;
establish the work of our hands for us—
yes, establish the work of our hands. (New International Version).

I have several instruments made of BZ. Superb sound.

I'm working with a luthier to have a Weissenborn Style 1, Bastogne Walnut, top/sides, details being worked out.

There are several sites on line where you can hear musicians play a Weissenborn and they are a rare treat.

Report Objectionable Content
Posted by Cholo, a resident of Livermore,
on Mar 28, 2017 at 5:14 pm

Report Objectionable Content
Posted by rosalindr, a resident of San Ramon,
on Mar 31, 2017 at 2:53 pm
rosalindr is a registered user.

I love listening to Per Olov Kindgren, a Danish musician who's guitar's tone is amazing. I sent my sister in San Francisco some of his music books. She has a very good guitar she bought from the Guitar Store in San Francisco. I don't play a guitar, but I love to listen to them.

How we eat away at our open space, even in Palo Alto
By Sherry Listgarten | 5 comments | 6,639 views