Uploaded: Aug 4, 2016
For the first time on my eight mission trips to Africa, we extended our time in South Africa to include visits to the Cape Town wine region as well as Kruger National Park and the impressive Leopard Creek golf resort.
The wine region is located about an hour drive from downtown Cape Town and its signature Table Mountain (we could not visit the mountain top because the cable car was down for annual maintenance). Check out this view from our hotel room in Cape Town. 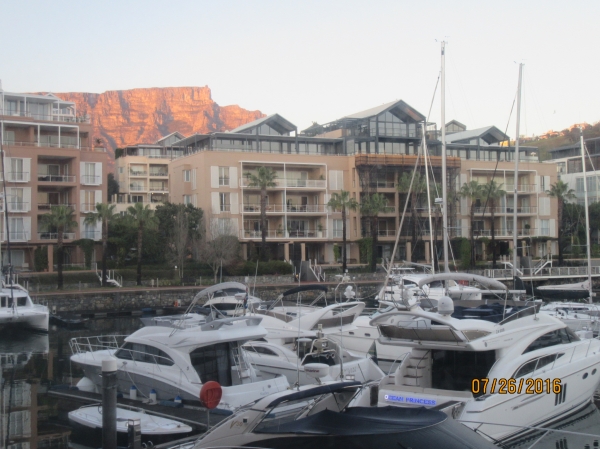 After a day of touring the Cape of Good hope and the sheer cliffs surrounding the bays (think of the Na’Pali Coast on Kauai), we headed for the wine country around Stellenbosch. In contrast to the Livermore Valley or the Napa or Sonoma valleys, the mountains surrounding the wine country are immense rock faces that towered thousands of feet above the vineyards. When the weather cleared, there were impressive vistas.
The wine industry in South Africa is about 350 years old—yes, 350 years, started by Dutch settlers. By contrast, the California wine industry is a bit more than 130 years old. We drank South African wine throughout our visit and were struck by both the quality and the very reasonable prices even in restaurants. Some of that was due to the 14-to-1 exchange rate for the Rand (it has been about 8 Rand to the dollar on prior trips), but there’s lot of competition.
And, as one winery owner put it, historically South Africans have objected to paying more for wine than for food. He’s working on changing that attitude.
We played a round of golf in a soggy De Zalze Golf Club in Stellenbosch after a day of heavy rain. The course reminded us of Ruby Hill. Vineyards bordered fairways on several holes and the working winery was located on site across from the second green. Expensive homes surrounded much of the course, while the locker facilities were the equal of most country clubs (although the course is open to the public). We were the only players because the course had been saturated by a couple of inches of rain and the creeks were still running high (Cape Town enjoys a Mediterranean climate with rains confined to winter months—it is the depth of winter in the Southern Hemisphere). 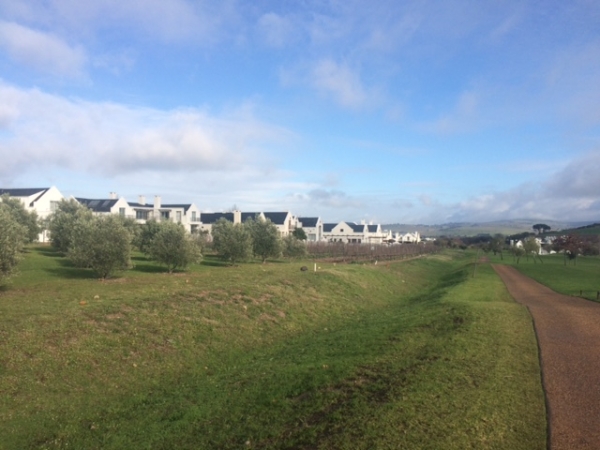 We then went to Ernie Els’ winery and tasted the range of wines offered there. Given the warm hillside location, the winery specializes in Cabernet Sauvignon. Having enjoyed Ernie’s Cab earlier with a couple of meals, we were delighted to taste the offerings as well as wander through the trophy room. There also was a small selection of Els’ golf items (shirts, hats, ball markers, etc.). The winery, like the others we visited, was a showplace with guests invited to sit down to taste. 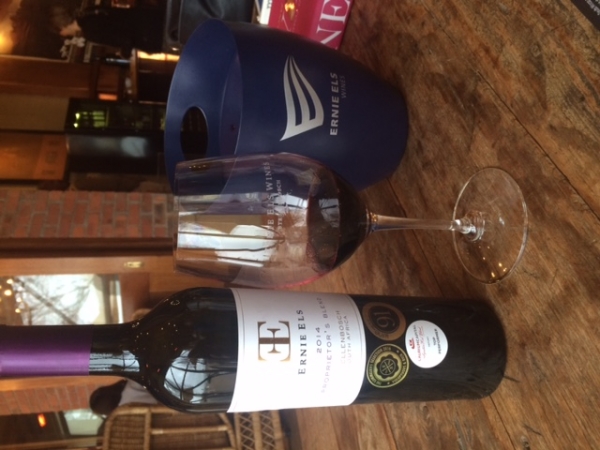 Unlike our second winery, Waterford, Els exports 90 percent of his wine. Waterford, by contrast, sells 80 percent in South Africa and handles its own distribution and sales.
What was distinctive from most California wineries was each of the three poured any wine they made including reserves. We tasted the current release of the best Els Bordeaux blend and the top of the line at the other two wineries.
Stellenbosch, where we tasted, is the heart of the wine region and a working city of about 120,000 with a university there.
We stayed over the pass in Franschhoek, a tiny village that shares its Main Street with the main highway. Think of Highway 29 through St. Helena—very similar. Lots of restaurants, art galleries and real estate firms selling pricey homes and estates. A few trucks aside, it was an ideal place to stroll. 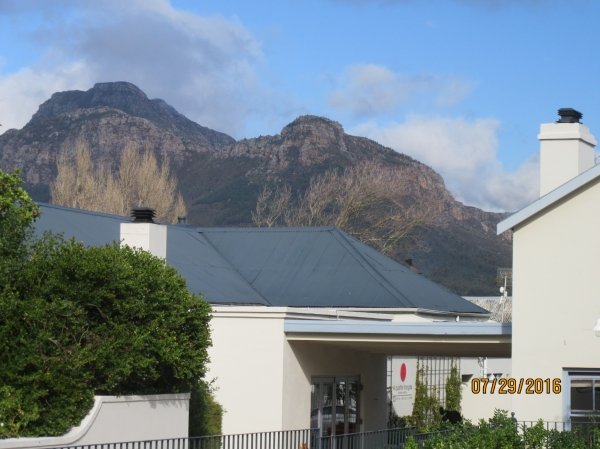 If you like wine and are headed for the amazing wild animal preserves in South Africa, Cape Town is an ideal side trip (about a two-hour flight from Johannesburg or the Kruger airports) and offers wonderful sightseeing (penguin colony included), great wines and more golf than you can play in a couple of weeks.

Great article, Tim. We took our kids to South Africa to visit family several years ago, and visited many of the same places. It was a magical trip. What a wonderful way to enhance your mission trip!


Cape Town and the Franshhoek wine area are a beautiful part of our world. My wife and I had the fortune to visit the same places you described in July of 2007. Best vacation we ever had. Good to hear the places you visited are still as enchanting as ever. Hope to hear more about your travels to Krueger National Park.

Doing more with the natural spaces we have
By Sherry Listgarten | 8 comments | 3,336 views

The future of homework
By Monith Ilavarasan | 0 comments | 588 views